A delayed start to #Blocktober from me, but better late than never! I’m going start off by talking about my contributions to the Half-Life 2: Episode 3 fan game, “Project Borealis”.

Roughly a year ago I stepped away from my side projects to assess why I was developing them at all. It was a self reflective time where I came to the conclusion that what was most important for me, was the ability to continue to grow as a level designer.

With the modding scene as it is, there’s no clear route for a level designer to build levels for a game without building a game itself. This is such a heavy undertaking, especially considering that I typically approach any free time work as solo projects. I wanted the chance to use my past experience in a new project and potentially learn from others along the way. I just needed to join a team.

With that in mind I started to look around for opportunities. Around this time, Project Borealis released their fourth update video. The video got a lot of attention, especially in some of the more Half-Life obsessed circles that I frequent. I decided to reach out and contact the team.

I talked with the team, expressing my interest in the project and explaining my credentials. After some discussion about availability and processes, I joined their ranks as a level designer. I was looking forward to being able to focus exclusively on a single area of development again.

I strongly believe that ownership and pride are the lifeblood of free time game development and often a strong contributing factor in producing quality content.

My plan was to grab a piece of content, build it and own it. Just like the old days. Ideally I’d stick with one level and respond to feedback as new systems and content came online and continually polish it. This would be extremely focused work and conforming to the free time I had available.

I started by completing some minor tasks on the upcoming Ravenholm demo, before moving onto a chunk of the campaign in the form of the Listening Post.

I won’t go into any narrative or gameplay specifics as to not spoil the game, but rather focus on the level design process used on the project.

I was provided a high level summary from the game’s script (narrative), and some rough guidelines as to how the level would start and end, but I mostly had free reign over the content. This aligned with my personal goals.

One of the specifications was to produce a top down sketch to illustrate gameplay intent. Typically I don’t think much of this practice, I feel it quickly causes layouts to become flat and overly sprawling. I had a similar criticism over this whilst working on the Far Cry series. In the case of Far Cry Primal, I even tried to highlight the limitations in the process by creating more vertical maps (with varying success – see the Tushwarha outpost).

While I’m not too interested in plotting out the micro details of the player experience in a top down, a useful aspect of initial sketches is being able to plot out high level spatial intent. This is a great way to mentally prepare for blocking out an environment and help provide a springboard for the art department (giving them ideas for world design, set dressing, etc.).

Following the approval of the top down sketch I got the green light to go ahead and start blocking out. Rather than using the more typical BPS method I chose to scale primitives in order to quickly block out bold shapes and determine an overall scale. As I refined the shape and scale of spaces I added minor details (again with scaled primitives) and a couple of objects from the asset library to better illustrate the narrative functions of the locations.

As more systems were coming online, including basic AI, I was able to rework areas to fit the work-in-progress player metrics. As the level came together I was starting to get a feel for the player height and default FOV; this allowed me to provide better opportunities for leading lines, weenies and the like.

Despite numerous source control issues (seriously, it was as if I were cursed), I got the first third of my assigned content into a good state and ready for the art team to jump in and start with preliminary visual treatments (and paint overs). 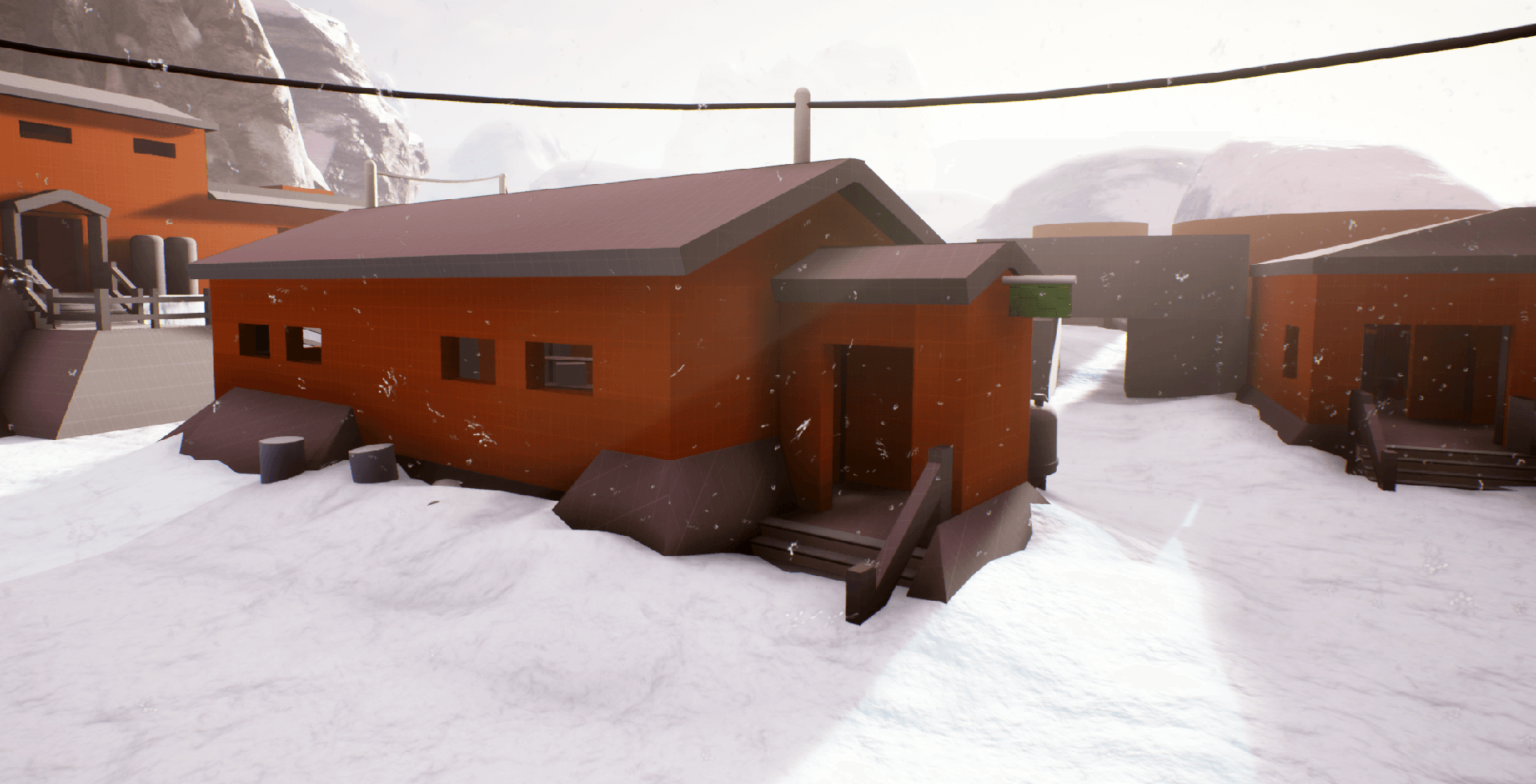 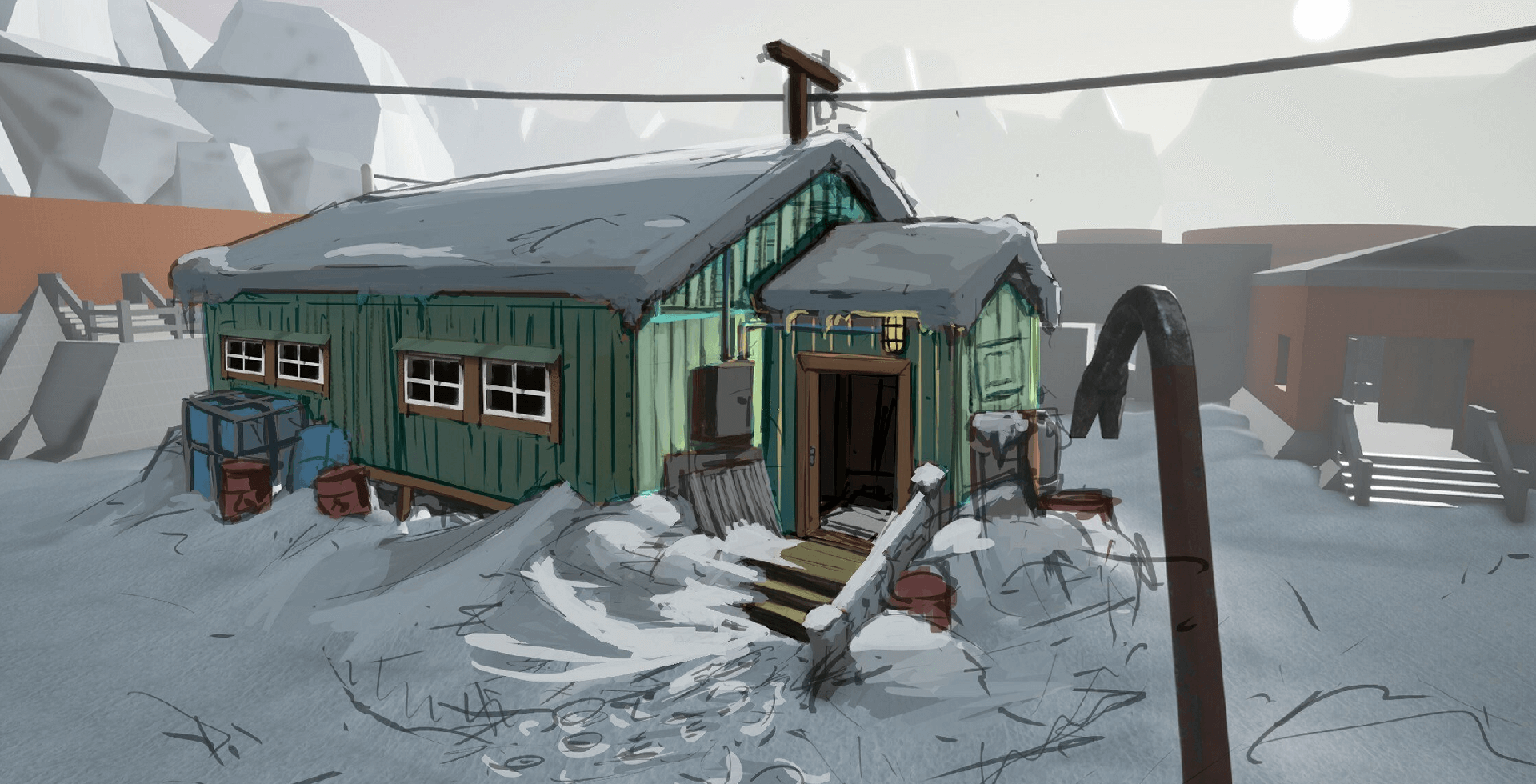 The level quickly ballooned in size from it’s original scope and became an open-plan/free-approach encounter – something that sparked controversy across the team for not sticking close enough to the Half-Life 2 formula.

I posted a little about this when the fifth Project Borealis update video went out. You can read more about that here and see in the video below.

As is standard in a side project, I started extremely eager and pumped out work at a steady pace. My problem was that I was often building blind whilst waiting for various gameplay systems to come online. During those periods, my progress slowed to a crawl and my personal projects became more appealing. On my own projects, if I need a system to work, then I just build it – that’s the one advantage of being your own bottle neck.

After the excitement of the fifth update video died down, I was dealt a killing blow. It was requested that my levels be reassigned to another designer. This was the antithesis of what I wanted. I joined a large team in order to increase ownership, and make my mark, not to kick-start other people.

The reasoning for the request was fair; I was clearly not spending an adequate amount of time on the project. However, in my defence, it’s my professional opinion that continued work on that map was not going to aid the design in any meaningful way. This felt more like an art or social media-driven call. Perhaps due to pressure to show progress? I’m not sure, but it didn’t sit well with me.

I decided to step away from Project Borealis and hand off my work as requested. This was absolutely the right decision, since leaving the team my free time output has improved remarkably and I have expanded my knowledge to new areas of game development.

Coincidentally, at the same time I stepped away from Project Borealis, I had just started helping out on another project; Last Round. I also started working on a number of small experiments…